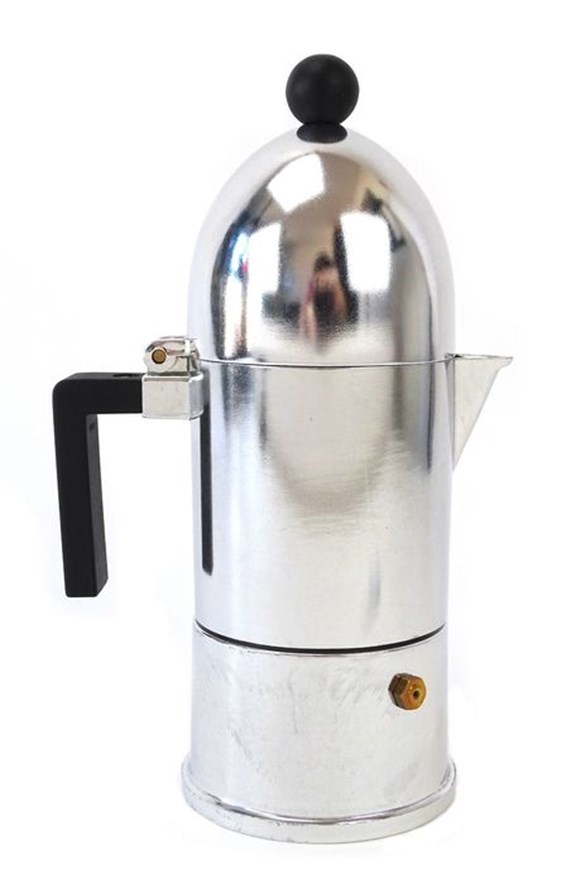 This Cupola espresso coffee maker was designed by Aldo Rossi in 1988. The design of the espresso maker is inspired by the Teatro del Mondo in Venice that was designed also by Aldo Rossi in 1979. The Cupola espresso maker can therefore be considered as a miniature monument, the ''La Cupola'' coffee maker is the symbol par excellence of the dialectical relationship between architecture and the domestic landscape that Aldo Rossi pursued and investigated over the years.

Coffee maker-temple, tower and basilica all at the same time, ''La Cupola'' celebrates the ritual of coffee with ironic contamination by the sacred and profane, indeed, chasing the dream of a domestic landscape designed and built analogous to urban space.

The La Cupola Espresso Coffee maker is made of aluminum that serves as an excellent conductor of heat and gives a characteristic flavor to espresso made in La Cupola thanks to the seasoning of the inner walls of the coffee maker with a thin film of coffee.

The red "A" is a sticker that can be removed.
Capacity: 3 cups.
Not suitable on electromagnetic induction plates.

The machine is completely new and never been used. Delivered with original packaging and manuals.

Please read the manual before using the Espresso coffee maker in order to get the best out of La Cupola.

About Aldo Rossi:
Aldo Rossi, born in Milan (1931-1997), is considered to be one of the greatest Italian architects of the second half of the 20th century. His design style was one of abstraction and reduction, his language of primary shapes, geometrical patterns, evoking silence, created one of the most intense, poetic works in architecture and design of his age.